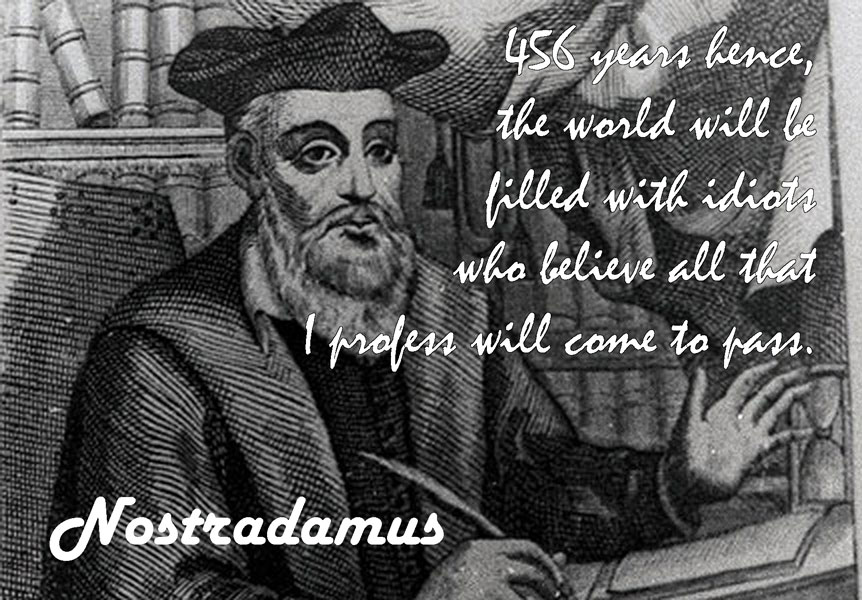 His name is known to many around the globe and his books sold in such great numbers that they are seconded only to the Bible, but for what on the surface appears to be predictions of only doom and gloom the life and work of Nostradamus has been largely left shrouded in its cloud of secret codes and mysticism to which skeptics have either paid scant regard or have closed their doors to his prophesies. What struck me recently however, was the caliber of people who form an integral part of The Nostradamus Society of America, and are deeply dedicated to continuous research and interpretation of his work. John Hogue for example, has spent 30 years in research, study and interpretation of Nostradamus’ Quatrains along with the metaphysician and writer Scarlette Ross and Peter Lemesurier, an ardent Nostradamus Scholar. These are just a few among many remarkable individuals who are methodically and conscientiously devoted to deciphering and building the bridge to a deeper and more insightful understanding of his body of work, steeped in metaphors.

Born in the South of France in 1503, Michel de Nostradame known as Nostradamus was expelled from high school because he dabbled in apothecary; an ancient way of making drugs that were meant to be a cure all for ailments but which many found did nothing beyond relieving pain. The practice of apothecary was considered a manual trade and this cast doubts on Nostradamus being serious about becoming a scholar. He eventually became a doctor. His life in the profession was short lived however, as at the age of 45 he had a psychic awakening or what is considered a spiritual gift. This led to him embarking on a career of prophetic writing.

There is speculation that it was the unforeseen tragedy of the death of his wife and two children from the bubonic plague that sparked his prophetic genius.  He became known as a Psychic, Astrologer, Channel, Occultist Psychologist, Prophet, Seer and Fortune Teller. His dismal messages of wrath and destruction resonated with the elites of the day but despite his trajectory extending beyond the 21st century, the current attention to his work by the wider population is lackluster at best.

Here are some of Nostradamus’ predictions in no particular order:

Nostradamus is reputed to have written the first Almanac in 1550, which was used for astrological information and a guide for farmers relevant to good farming practices for the best yield, including best planting seasons and weather forecasts. In 1555 he published The Prophecies which, though filled with subliminal innuendoes, contributed to his worldwide notoriety. He was labeled a fraud for publishing the Almanac without the requisite authorization and was consequently imprisoned in 1562. The Almanac was eventually published in America in 1792.

Scholars and interpreters have had great success in decoding or deciphering his writings and have found in the process that much of his predictions continue to come true.

His recently discovered 80 page book of illustrations which is believed to have originated in Rome, and which some allude to Nostradamus being the artist, underscores many of his previously written Quatrains which some of his “disciples” believe were too dangerous to be stated more plainly. This book which contains layers of intrigue compounded by the mystery and timeliness of its appearance has given cause to the re-emergence of his predictions.

In tracing its origin, the book was found to have been noted in the annals of the Vatican Library where it was registered as Nostradamus’ work, despite skepticism regarding his aptitude for such undertakings.

Nostradamus lived for many years in fear for his life as the church felt threatened by his prophecies. They feared that his cryptic messages could have superseded their doctrine and be misinterpreted to mean that he was a messenger of God.

It is believed that Nostradamus, who continues to be the most famous prophet in history, wrote the Quatrains more as an alert that was meant to be passed down through the ages to thwart suffering or an apocalypse from which there would be no return.

Nostradamus died in 1566 of pulmonary edema also known as dropsy.

The big question that hovers here is whether God in his wisdom would give anyone the knowledge to predict the end of the world anymore than he would, creation. None of us living in this dispensation will live long enough to know and though he is not being labeled a fraud, it is often the one misstep that throws off the total belief system.